In press conferences and Sunday talk shows the NRA and supporters falsely claim that any laws limiting the sale of guns violates their second amendment rights. Instead, they self-righteously advocate for law enforcement to use existing laws to "keep guns out of the hands of criminals".

However, there is nothing in the NRA's actions to substantiate that they have any desire to do so. Their recent opposition to universal background checks or registration of firearms contradicts any sincere desire to help law enforcement accomplish that goal.

Even now, in the aftermath of the Newtown tragedy and increasing public sentiment in favor of passing gun safety legislation, the NRA has successfully lobbied congress to push through laws that will hinder law enforcement in tracking down weapons used to commit crimes. This was done as riders to the spending bill recently passed to keep the government funded.

As reported by Tamara Kieth from NPR,


"There was very little discussion," says Rep. Hal Rogers, R-Ky. Rogers is chairman of the House Appropriations Committee... "These are not new. These are general provisions that we've carried for a long time," Rogers says.

What is new is that the continuing resolution makes four of these riders permanent. One rider prevents the Department of Justice from requiring gun dealers to conduct an inventory to see if guns are lost or stolen. Another requires the Bureau of Alcohol, Tobacco, Firearms and Explosives to make it clear that any data from criminal traces on guns can't be used to draw broad conclusions about firearms-related crime...

Sen. Richard Blumenthal, D-Conn., says the provisions "restrict inventorying, information gathering, other practices that combat gun violence." Blumenthal is pushing for new gun controls and changes to make it easier to enforce current laws. He's no fan of these riders. But he voted for the continuing resolution anyway.

Democratic Rep. Carolyn McCarthy of New York has been fighting these provisions for years, but she, too, voted for the spending bill. "What's tough on this particular vote is do we shut the government down?" she says.

This shows the NRA to be liars and hypocrites. There is really no interest in keeping weapons away from criminals or the insane. Claims of "protecting second amendment rights" are disingenuous. The NRA has but one motivation. That is to lobby for the gun industry to sell more guns. They have been relentless (and successful) in that pursuit. The power of the NRA will continue as long as we have a system that lets Congress accept bribes in exchange for access and influence, even while putting our nation at risk for further tragedies like Newtown.

Jazz and Beyond for your iPhone 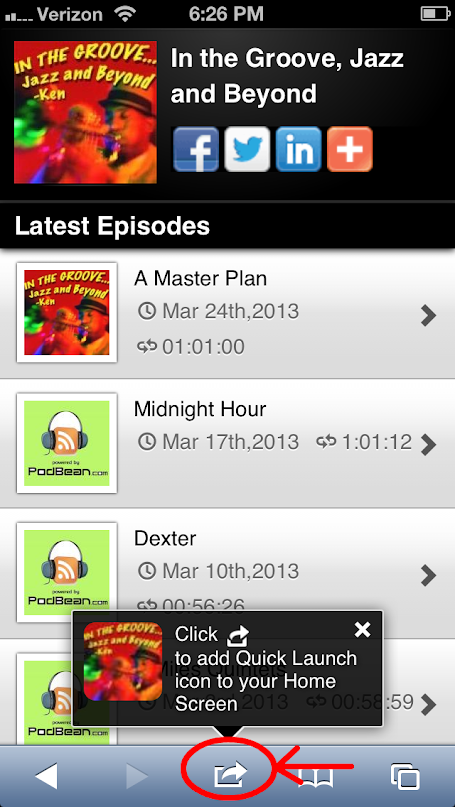 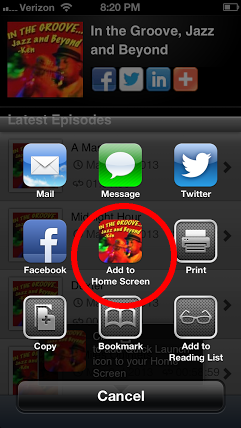 If you have an Android or other smartphone, you should still be able to link to the mobile site and add a  shortcut to your home screen.
Posted by Ken Laster at 8:07 PM 1 comment:

Of Guns and Budgets

Last week was a momentous flop for the Republican Party. Are they in complete denial of the 2012 elections? Are they so entrenched in their ideology of the far right that they have forsaken the will of the people? Has the Tea Party put a stranglehold on the Republican leadership? On one hand, the party is trying to reach out to minorities and the middle class, but beyond the rhetoric, its the same old policies that have driven those groups away in droves.

Take, for example the recent negotiations surrounding gun safety legislation. If there is one issue that Congress could agree on, you would expect it to be on Universal Background Checks for gun purchases. On this single issue, there is no suggestion of banning weapons or ammunition, no confiscating guns from law abiding citizens. Just keeping new gun sales out of the hands of criminals and the mentally ill. Isn't that what everyone says they are striving for? Yet, not one Republican on the Senate Judiciary Committee voted for universal background checks, despite polls showing 91% of the people support them. Republicans have put the interests of the gun industry and the NRA above the will of the people. The GOP clearly has shown themselves to be a party of special interests ($$) and obstructionism. No wonder nothing can get accomplished in our Congress.
And now the Republican House has put forth their budget as authored by defeated VP candidate Paul Ryan. A recent Bloomberg editorial summed it up best.

... it’s hard to view this latest budget as anything more than a holding pattern for a political party caught between its past and its future. Like the fiscal outlook, the nation’s politics have shifted. Ryan’s budget pockets the savings from Obama’s health-care plan while calling again for its repeal. As Jim Nussle, a former Republican congressman and budget director under George W. Bush, said to CNBC: “I think we fought that battle.” Pretending otherwise is silly.
Similarly, the last Ryan budget was fully vetted in the 2012 presidential campaign. Afterward, Democrats won the White House and picked up seats in the Senate and House. Republicans can keep offering the same platform of spending cuts, but they seem unlikely to achieve different results.
...It is crucial that policy makers find ways to bring down medical costs, but there are ways to do this without leaving the elderly and poor with inadequate health care. Medicare could, for example, raise premiums for high earners, reduce payments to drug companies or drive competition by making public the prices it pays for drugs, devices and medical services... The latest Ryan budget, like its predecessors, is an artifact of the era.
Republicans may try to put a kinder and gentler facade on immigration, healthcare and cuts to valued safety nets (entitlements), but their actions on guns and budgets this week show where they really stand. As the saying goes, "You can put lipstick on a pig, but it's still a pig".
Posted by Ken Laster at 4:09 PM No comments: