We saw Pat Metheny concert last night and part of the show included a scaled down version of the Orchestrion.


Recently I have seen several bloggers and pundits suggest that Obama's seemingly commanding lead may be too big for Romney to overcome. I feel that the recent polls show that the popular vote will be extremely close, and in the last few days, Obama's lead has been shrinking. The MSM has been reporting a spread of only 2 to 4 points in national polls, most of which are within the margin of error. 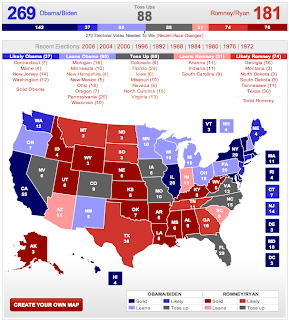 The electoral college is shaping up somewhat differently though. Most of the swing states are leaning to Obama, though I suspect that those will tighten up as well. The way those Red/Blue maps look today, it is hard to work out a scenario where Obama does not reach the 270 electoral votes needed to win the election. My favorite poll-watching sites are FiveThiryEight and RealClearPolitics. The latter shows Obama with 269 electoral votes as of today, with 88 toss up votes not counted.

I think that the race will be very close and several of those swing states may very well swing the other way (as we are seeing in NC). With over 30 days to go, three Presidential and one VP debates, a vulnerable Middle East situation, and another round of monthly economic reports to be released, this race could change significantly in either direction.

However, what Mitt Romney can not escape is the lack of trust in him, that voters feel. After all, his positions change almost daily at this point. Even in these last 48 hours, I have seen him change position on significant parts of ObamaCare, immigration policy and taxing the wealthy. So which Romney can you believe? The Romney we will see in the Debates this evening? The extreme right wing Romney we saw in the Primaries? The moderate Romney as the Governor of Massachusetts? The Romney of today, last week, 3 months ago?

Ultimately, the election will be decided on trust. With Romney's chameleon-like record, how can you trust that the Romney you vote for on November 6 will put forth an agenda that is consistent with the values and policies that he speaks for today? It is that lack of trust, that weakness in character, that lack of conviction, the constant flip-flops that Romney cannot escape.

I predict that Obama's strategy for this debate will be to exploit that weakness. Obama will highlight how Romney's positions change depending on the audience he is speaking to and the latest polling data. Romney is a weak candidate, and would be a weak President. He is too easily swayed by Corporate interests, polling data, special interest groups and campaign contributors. If Obama uses this tactic, I cannot see how Romney can effectively counter. Checkmate!
Posted by Ken Laster at 10:29 AM No comments: