Jazz is For Your Heart

excerpted from liner notes to Mood Swing by Joshua Redman. 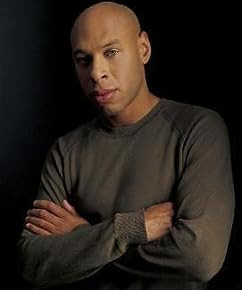 "According to popular notion, jazz is something which you research and study, inspect and dissect, scrutinize and analyze. Jazz twists your brain like an algebraic equation, but leaves your body lifeless and limp. In the eyes of the general public, jazz appears as an elite art form, reserved for a select group of sophisticated (and rather eccentric)intelligentsia who rendezvous in secret, underground haunts (or accessable ivory towers) to play obsolete records, debate absurd theories, smoke pipes, and read liner notes. Most people assume that the appreciation of jazz is a long, arduous, and painfully serious cerebral undertaking. Jazz might be good for you, but it just isn't any fun.


This image is simple, powerful, and dangerously appealing. But it is also egregiously false.

Jazz is music. And great jazz, like all great music, attains its value not through intellectual complexity but through emotional expressivity. True, jazz is a particularly intricate, refined, and rigorous art form. Jazz musicians must amass a vast body of idiomatic knowledge and cultivate an acute artistic imagination if they wish to become accomplished, creative improvisers. Moreover, a familiarity with jazz history and theory will undoubtedly enhance a listener's appreciation of the actual aesthetics. Yes, jazz is intelligent music. Nevertheless, extensive as they might seem, the intellectual aspects of jazz are ultimately only means to its emotional ends. Technique, theory, and analysis are not, and should never be considered, ends in themselves.

Jazz is not about flat fives or sharp nines, or metric subdivisions, or substitute chord changes. Jazz is about feeling, communication, honesty, and soul. Jazz is not supposed to boggle the mind. Jazz is meant to enrich the spirit. Jazz can create jubilance. Jazz can induce melancholy. Jazz can energize. Jazz can soothe. Jazz can make you shake your head, clap your hands, and stomp your feet. Jazz can render you spellbound and hypnotized. Jazz can be soft or hard, heavy or light, cool or hot, bright or dark. Jazz is for your heart”. 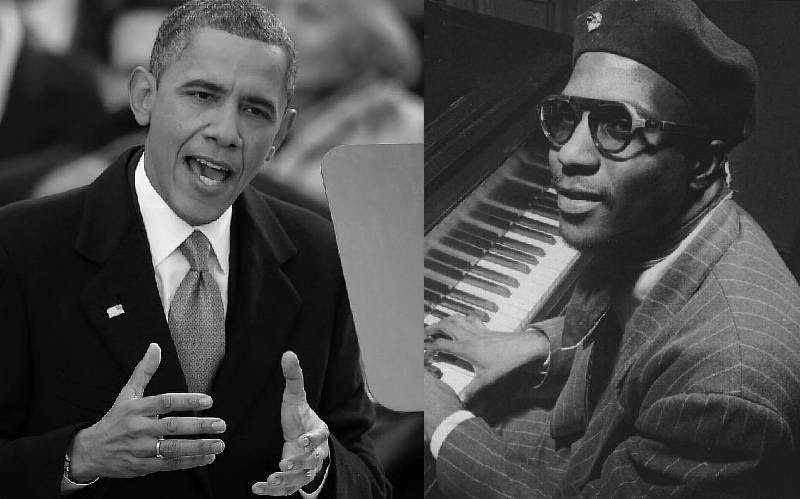 I offer you this musical mash-up of Thelonious Monk's Straight No Chaser combined with excerpts of Barack Obama's inspiring 2013 Inaugural Speech. The President articulated a vision for America where there is equal opportunity for all including gays, immigrants and women. Where we are guided by our forebears who took a stand at Seneca Falls, Selma, and Stonewall. It speaks to American values where safety-nets like Social Security, Medicare and Medicaid are not looked upon as sapping our initiative  but strengthening our commitment to the elderly the sick and the disadvantaged.

Black Radio ~ Robert Glasper Experiment - Ground breaking, chart topping, Jazz-R&B-HipHop crossover album.
Star of Jupiter ~ Kurt Rosenwinkel - Unique sound with a spatial quality and a jazz-rock fusion influence.
Rayuela ~ Miguel Zenon and Laurent Coq - Concept album inspired by a the novel of the same name. Jazz album with Latin, Classical and Indian influenced sound.
Circle House ~ Kris Allen - This quartet led by Hartford based alto sax player shows some great hard bop chops along with raw emotion in these original compositions (and one standard).
Seeds From the Underground ~ Kenny Garrett - Non-stop intensity from start to finish. Soaring alto sax lines over African rhythms.
Four MF’s Playin’ Tunes ~ Branford Marsalis - Hard driving modern bop from some extroadinary jazz cats.
All Our Reasons ~ Billy Hart - Thoughtful compositions and expressive drumming leads the way with this great quartet's explorations.
Unity Band ~ Pat Metheny - Metheny's great all-star touring band of 2012. Chris Potter is paired beautifully with Metheny's playing.
1619 Broadway ~ Kurt Elling - Elling's interpretations of some great popular songs from the 60's and 70's with fine modern jazz arangements behind them.
Initial Here ~ Linda Oh - This great young bass player shows off her intricate writing and arranging skills with a fine quintet.
Accelerando ~ Vijay Iyer - An intense set of piano trio works from this forward thinking creative jazz artist.
The Eleventh Hour ~ Jonathan Blake - Blake explores many facets of jazz in first CD as a leader. He has a modern sound steeped in a swinging tradition.
Spirit Fiction ~ Ravi Coltrane - Ravi continues to grow creatively as an artist. Produced with Joe Lovano, and his influence is felt in these tracks.
Family ~ 3 Cohens- Anat, Avishai, and Yuval shows that a family that plays together, swings hard together. 3+3 play as 1 with these great sextet arrangements. Fine soloing as you would expect from the Cohens.

Grandma’s Revenge ~ Frank Varela - Soaring guitar work showing influences from Wes to Hendrix on this fine guitar trio album
Tales & Stories ~ Sinan Bakir - Fine compositions, great chops with an Eastern European influence from this Turkish born, Hartford guitarist.
Live at Smalls ~ Dezron Douglas - Hartfords up and coming bass player is getting some world-wide attention playing with Cyrus Chestnut, Ravi Coltrane and many more. His first major release as a leader swings hard.
Underground ~ New Jazz Workshop - This long standing project by leaders Dezron Dougas (bass) and Lummie Span (sax) puts a hard swinging groove to their original compositions.
Books on Tape, Vol 1 ~ Craig Hartley - Skilled piano chops and wonderful writing from one of Hartfords best jazz cats on this trio album.
State of Emergency ~ Nat Reeves - One of the best jazz session bassists shows how to lay down the perfect rhythm and push the music ahead with this quartet. Fine trumpet playing by newcomer Josh Bruneau deserves your attention.

It's getting a little tiring hearing about how proposed new gun laws only punish the law abiding, responsible gun owner. Every single gun owner I have had this discussion with tells me about how responsible they are, how they have taken a gun safety course and learned how to shoot from a professional on a range. Every one. How do I know know they are responsible? Am I just supposed to just take their word for it? How do I know that everyone in their household is responsible, that their friends are responsible? I'll bet that Adam Lanze's mother said the she was responsible, and look how easy it was for her deranged son to get a hold of those weapons (no one seemed to even know he was deranged).

The chances are far more likely that those "safe and legal" guns will result in an accident, suicide or fall into the wrong hands to be used in a crime, than they will actually be used for self defense. Why should we as a society accept that risk.

With all the guns in our society, how often do you hear of an instance where a gun has been used to fight off an aggressor in an act of self defense? According to the FBI there were only 201 justifiable homicides using a gun in 2011 versus over 30,000 gun related deaths from murder, accidents, suicides, robberies, and assaults.

Do you walk around with a loaded handgun? Do you keep a loaded firearm "at the ready" while at home? If you do, you are not following the prescribed safety measures of keeping your firearm locked away with the ammo in a separate hidden location. If you do follow these safety measures, its not likely you can have the quick access to your gun needed for self defense. So what is the point? You have a false sense of security. You are far better off getting the family out of the house and calling 911 than you are of having a vigilante gun fight with an intruder, and society is better off with one less gun.

As for the defense against a tyrannical government... oh please, that is a childish Tea Party fantasy. We have a democracy with checks and balances. We have a means through our democracy to "overthrow" our government every 4 years. Do you think that Obama is planning this tyrannical takeover? Are you thinking that another government will invade and your "private militia" are better prepared to defend us than our military? Will this Tea Party militia defend us against an army's bombs, drones, fighter planes, tanks etc? Let's get real!!!

The fact is that country's that have actively reduced the number of guns in their society have far less gun related deaths. Japan, UK, Sweden, and nearly every democratic government sees gun deaths in the dozens. We count them in the 10's of thousands. NYC has seen a sharp decline in gun violence by strict enforcement of gun regulations. The silly notion that having more guns will reduce gun crime is just a fantasy perpetrated by the NRA to foster a gun culture. This only benefits the manufacturers and retailers that make millions off the sale of these deadly firearms. So don't be under the delusion that the NRA is here to protect your "second amendment rights". That's just BS.

Perhaps my outrage is because I still haven't gotten over the murder of 6 year old Ana Marquez Greene, daughter of Jimmy (and Nelba Marquez-) Greene, loved and respected members of our Hartford Jazz community. I am angered over Ana's death and the 19 other 1st graders and their teachers murdered last month at Sandy Hook Elementary School in my home state. This tragedy likely would not have occurred if not for the easy access to assault style firearms that were used in this and so many other massacres like this. I don't think I have heard ANY of the survivors or their family members advocate for more guns. The victims close to these tragedies (like Arizona Congresswoman Gabby Gifford) all advocate for more gun control; for less guns in our society. I also feel strongly that those that take the NRA's position that more guns are needed in our homes and schools are putting me and my children at greater risk of injury or murder. So, when I argue about this and I am told not to get personal, sorry but I guess I do take it personally.

(this blog is not affiliated with Sandy Hook Promise, but I do support their efforts)

Posted by Ken Laster at 5:38 PM No comments: