This years Newport Jazz Festival was a very wet affair, but that didn't keep Jazz fans from showing their love and devotion to this art form. Thousands endured the rainy weather to hear both classic jazz and modern new music. This year, the 60th anniversary of the Festival added a third day to the weekend schedule. It was a good thing they did, because the added Friday schedule was the driest day of the Festival. Here is my day-by-day review of the acts we caught during the Newport Jazz Festival. There were 43 shows scheduled over 3 days. We saw about 20. Below are the highlights of what we saw.

Day two brought a deluge of rain. Usually one would be sampling the concerts, running between the three stages that are in Fort Adams State Park. But because of the heavy downpours, once you got a seat under a tent of one of the two smaller covered venues, you are best to stay put and enjoy the shows, keeping as dry as possible. We planted ourselves under the Quad Stage and heard great performances by Brian Blade Fellowship featuring his understated hymn inspired sound that had a folk music quality to it. SF Jazz Collective resurrected a "best of" set from its previous 6 albums. An outrageously awesome percussive Cuban band, Pedrito Martinez rocked the audience with its Latin beats. Late in the afternoon, the rain subsided enough to leave that tent and hear a tremendous set by the Kurt Rosenwinkel's New Quartet. The rain held off to venture to the open air large Fort Stage to hear Wynton Marsalis leading the Jazz at Lincoln Center Orchestra. We finished the day back under the Quad Stage Tent to hear Dave Holland and Prism. This band totally rocked out, with guitarist Robin Eubanks channeling Mahavishnu, Hendrix and Jimmy Page all at once.


Sunday, day three had more of the same weather issues, and once again we claimed our space under the Quad tent. The Cookers kicked it off with their all-star lineup of Billy Harper, Donald Harrison, Billy Hart, Cecil McBee and more. Just when I think I am growing tired of straight ahead classic jazz, I am blown away by how this music can swing so hard. Next up was Vijay Iyer's Septet. Vijay brought some modern new compositions and arrangements that ventured into avant garde, yet never lost its foundations. At one point, they broke into a very tight funky refrain that had everyone's head bobbing. That was followed by George Wein's All-Stars featuring Anat Cohen, Randy Brecker, Lew Tabakin and others. Again, the straight ahead jazz classics were kicked up a notch with heavy swing and virtuoso soloing. Gary Burton took the stage with his quartet featuring Julian Lage on guitar. No surprises here, just solid playing with that great bright sound coming from expertly executed vibes and guitar. We concluded our Newport Jazz experience at the Harbor Stage with Danillo Perez Panama 500 band. It was a laid back performance with Latin rhythms over the thoughtful improvisations by the creative Perez on piano and a harmonica soloist as well. Danillo's 3 year old son took the stage and actually played the Congas on the final piece delighting the crowd.

Despite the nasty weather, this Newport Jazz Festival was one of the best I've attended. The quality and variety of the music, the appreciation, devotion and the feeling of community shown by the jazz fans trumped any negativity that the weather brought on. It's great to see Newport Jazz Festival's founder George Wein, more than holding his own on piano at 88 yrs old, still active in organizing this historic festival for most of its 60 year existence. 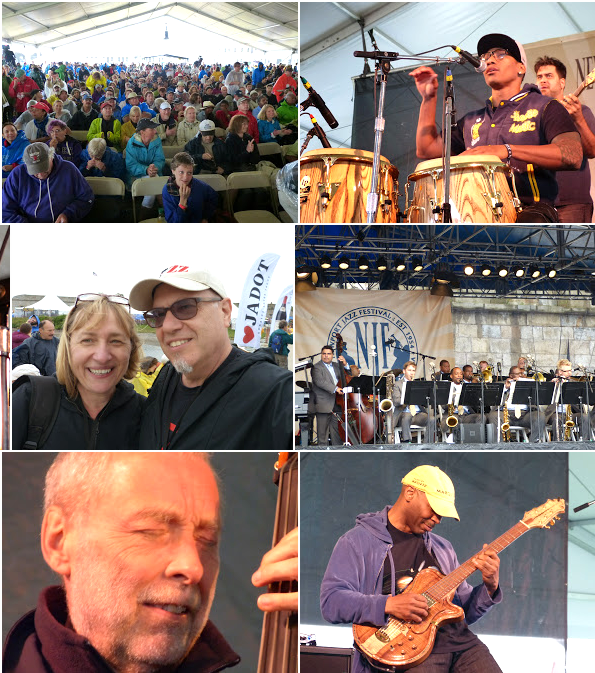